The “Holy Fool” in Islam

In all of the world’s religions, one finds the notion of a “holy fool”: an individual who transcends societal conventions with his/her ridiculous behavior and unpredictable manner of revealing moral truths. For my “Religious Heritage of Islam” and “Religions and Cultures of the Middle East” courses, one of my favorite class exercises involves having students read and discuss a variety of stories and sayings about one of Islam’s most famous “holy fools,” Mullah Nasruddin. Nasruddin is a legendary 13th-century satirical figure who is claimed by many – including Afghans, Turks, Kurds, Uzbeks, and Iranians – to be their own. In Arabic contexts, this figure is often known as Joha. Thriving well along the boundaries of traditionally Muslim societies, he remains the inspiration for folklore in places as varied as Georgia, Macedonia, Bulgaria, Azerbaijan, and Sicily.

Nasruddin is characterized as devout yet irreverent, unpredictable yet consistently foolish, comically inept yet clever. In this exercise, I help my students to understand how stories about Nasruddin use humor to represent and critique Islamic religious and cultural norms, customs, beliefs, and institutions, and to destabilize widespread assumptions. By presenting lessons in a humorous way, Nasruddin holds up a lens to how people flatter political and religious leaders and tell them what they wish to hear. He takes on the role of the fool, which allows him to be subversive without posing a real threat to venerated systems of authority or to pious conventions that have been dampened by empty formalism.

While tales about Nasruddin defy easy classification, I work with students to explore a variety of themes that can be found in them. One theme concerns what I call the “bazaar haggling mentality,” which can be described as “outrageous reasoning” that is nonsensical yet amusing and which challenges the status quo. It also can reflect an ego-centric attitude in that the individual seems driven by his wants and idiotic yet transparent about his foolishness. Here are some examples:

Tit for tat
Nasruddin went into a shop to buy a pair of trousers.
Then he changed his mind and chose a cloak instead, at the same price.
Picking up the cloak he left the shop.
‘You have not paid,’ shouted the merchant.
‘I left you the trousers, which were of the same value as the cloak.’
‘But you did not pay for the trousers either.’
‘Of course not,’ said the Mulla – ‘why should I pay for something that I did not want to buy?’ (24)

Another theme explored is Nasruddin’s critique of the Insha’Allah mentality found in traditional Muslim societies, which have tended to prioritize theological preoccupation with divine will over philosophical reflection on observable causes. This tendency coincides with a cultural inclination to assign a large role to chance or fate, and can involve minimizing the significance of human responsibility in relation to divine causality.  Here are some examples:

Assumptions
‘What is the meaning of fate, Mulla?’
‘Assumptions.’
‘In what way?’

If Allah wills it

In contrast to the previous theme, another theme is Nasruddin’s challenges to rationalism. Here we find Nasruddin keeping philosophers and worldly, rational thinkers on their toes by using inconsistent logic:

Nasrudin was walking along an alleyway when a man fell from a roof and landed on his neck. The man was unhurt; the Mullah was taken to hospital.  Some disciples went to visit him. ‘What wisdom do you see in this happening, Mullah?’ ‘Avoid any belief in the inevitability of cause and effect! He falls off the roof – but my neck is broken! Shun reliance upon theoretical questions such as: “If a man falls off a roof, will his neck be broken?”’(26)

Prayer Is Better Than Sleep

As soon as he had intoned the Call to Prayer from his minaret, the Mulla was seen rushing away from the mosque. Someone shouted, "Where are you going, Nasruddin?" The Mulla yelled back, "That was the most penetrating call I have ever given. I’m going as far away as I can to see at what distance it can be heard." (98)

The Value of Truth

‘If you want truth,’ Nasruddin told a group of Seekers who had come to hear his teachings, ‘you will have to pay for it.’ ‘But why should you have to pay for something like truth?’ asked one of the company. ‘Have you not noticed,’ said Nasruddin, ‘that it is the scarcity of a thing which determines its value?’ (90)

By providing my students with handouts listing these quotes, I then ask them to work in groups to identify themes that relate in some way to larger questions of Islamic theology and philosophy (for example, traditionalist and rationalist understandings within Islam) that we have discussed in previous class sessions. We then hold a larger group discussion to discuss these themes as well as ways in which a character such as the “holy fool” can hold up a mirror to society or remind people never to be too sure about their assumptions. Lastly, I also like to project different visual representations of the Mullah, and ask the students what do they see in images such as the following miniature. 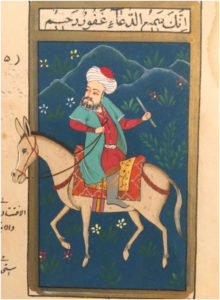 As the students immediately notice, the Mulla is riding backward on a donkey I ask them why, and then I explain how this miniature depicts a well-known story of Nasruddin riding his donkey backward while leaving a village that he had visited. When asked the reason, he simply responded: “I did not want to disrespect the people by having my back to them.”

In my experience, the “holy fool” offers students a fresh way of experiencing Islamic religion and culture, breaking through stereotypes to reveal humanity and humor as well as subtle wisdom and capacity for satire. Many students have testified that exercises involving stories of Mullah Nasruddin are rewarding and valuable, and allow them to think critically about larger issues even while experiencing a deeper respect for the richness of the culture from which the stories emerged. Mullah Nasruddin’s tendency to raise questions but not necessarily answer them helps to open up space for deep questioning and laughter alike.

I would like to conclude with one last story, giving the Mullah the last word.

The Mulla lost his key and was looking for it under a street lamp.  A man noticed that the Mulla was looking for something and stopped to help him find it.  After an hour of looking, the man asked the Mulla if he could remember the last time he saw the key and the Mulla replied, ‘In my bedroom.’ The man angrily responded by stating ‘Then why are you looking for it here?’ ‘Because,’ Nasruddin told the man, ‘There is much more light here.’

**All quotes in this blog post come from I. Shah (1971). The Pleasantries of the Incredible Mulla Nasrudin. New York: E. P. Dutton.

Meena Sharify-Funk is an Associate Professor and former Chair for the Religion and Culture Department at Wilfrid Laurier University who specializes in Islamic studies with a focus on contemporary Islamic and Sufi thought and identity. She also is the mom of a beautiful 11 year-old child who consistently reminds her how to live a life of awe and wonder.  Sharify-Funk has written and presented a number of articles and papers on Islamic and Sufi hermeneutics, women and Islam and the role of cultural and religious factors in peacemaking. She has written, co-authored and co-edited several books including Contemporary Sufism: Piety, Politics and Popular Culture (2018), Unveiling Sufism: From Manhattan to Mecca (2017), Encountering the Transnational: Women, Islam, and the Politics of Interpretation (2008), Contemporary Islam: Dynamic, Not Static (2006) and Cultural Diversity and Islam (2003).