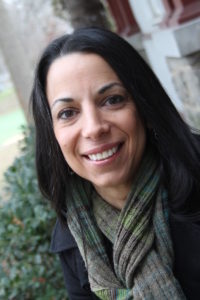 Earlier this semester, a number of faculty on our campus organized a “teach-in” to address growing concerns over the Trump administration’s recent executive orders and presidential leadership. Entitled, “Freedom from Fear: American Democracy in the Trump Era,” these sessions ran in 30-minute blocks from 9 am to 4 pm with faculty from a wide range of disciplines – sociology, political science, English, economics and criminal justice – covering topics such as Islamaphobia, right-wing populism, fascism, truth and rhetoric, sanctuary cities, and immigration. One of my Religious Studies colleagues, Dr. Jennifer T. Kaalund, and I gave a presentation titled, “Criminalizing the 'Other' - The Creation of Enemies and the Corrective of Catholic Social Teaching.” Our intent was to demonstrate how the recent executive order “Enhancing Public Safety in the Interior of the United States” (signed 1/25/17), with its stipulation to “make public a comprehensive list of criminal actions committed by aliens,” echoed similar attempts to create criminals out of people considered to be “other.” In our remarks, we referenced examples from Germany’s run-up to World War II and newspaper coverage of the “Central Park Five” case in 1989.

In the first case, the newspaper Der Stürmer warned of a Jewish program for world domination and published “crimes” committed by Jews. One article “Who is the Enemy?” (1934 issue) blamed Jews for destroying the social order; the tag line on every issue’s opening page read “The Jews are our misfortune!” In the second case, a number of New York newspapers ran headlines such as “Wolfpack’s Prey” and “Wild Savages” to describe the five Black and Latino boys (between ages 14 – 16) accused of raping and beating a 28-year-old woman, Trisha Meili, as she jogged in Central Park. At the time, Donald Trump purchased full-page ads in four New York newspapers calling to reinstate the death penalty (even before the boys had their day in court) to “serve as examples so that others will think long and hard before committing a crime or an act of violence.” (New York Times 5/1/89)

At the end of our presentation, Dr. Kaalund and I fielded some questions from students attending the day’s sessions. One student stood up, let’s call her Anna, and commented that she was insulted and disheartened, not by the presentation, but by the reaction of students behind her who were, in her view, disruptive and disrespectful during the teach-in, making it difficult for her to learn. She voiced her concern that students were wasting an opportunity to learn something new, perhaps because the content challenged their political views and assumptions.

Things got heated very quickly. One of the students sitting behind Anna, let’s call him Will, wasn’t going to be “called out” without a response. Our time was up, but he refused to comply with repeated requests to continue the conversation in another venue. I had to escort him out of the auditorium with the promise that I would give him an opportunity to speak his mind. I had no idea what to expect.

When the three of us – Anna, Will and I – sat together (I made sure I was strategically positioned between them), Will admitted that he had reacted quite strongly to how I had, in his view, equated Trump’s executive action with Nazi Germany and the Holocaust. Once that connection was made in his mind, everything else was less than credible. He simply shut down and proceeded to carry on the conversation with his friends seated with him. Anna asked him, “Why didn’t you raise your hand when you had an opportunity to share your question with the presenters?” Will thought it would be a waste of his time and he wasn’t as invested in the process of engagement at that particular moment as was Anna. He wasn’t prepared to share publically what he was more at ease sharing privately: that religion, in particular, Catholicism, had nothing to say in response to the executive orders; that everyone has the right to their own political views; and that “you might have a Ph.D. but I can believe you’re wrong.” He heard something he didn’t want to hear after which he foreclosed the possibility of learning altogether.

A number of things were learned from this encounter. First, the faculty who organized the next teach-in built in more time for questions and discussion. It was clear to us that we needed to provide a space for processing the information shared at the teach-in; it was our responsibility to model with and for students what civil engagement can look like. Second, we developed a list of norms for civil engagement that were shared at the beginning of each new teach-in session and at the onset of the Q&A period so that everyone in the room would be mindful of the commitment to listen openly and speak respectfully. Finally, we organized fewer sessions the second time around, so as not to overwhelm students with too much information all at once.

While I learned from this particular teaching moment, I must admit that the entire encounter saddens me as I reflect upon it.  I did not mention the racial and gendered dynamics of power and privilege in the mix – myself and Dr. Kaalund as two women of color faculty, Anne as a student of color and Will as a white male student –  but I believe these dynamics were operative and had much to do with a willingness (or lack thereof) to listen. In fact, this is what is encountered in the religious studies and theology classroom all the time, even as we try to steer so far away from it. In addition to the content of the encounter between religion and politics, as loaded as that is already, I believe this demonstrated the need for our constant vigilance and mindfulness – indeed our moral obligation – to keep religion and politics at the forefront of our public discourse.

I agree with Roger Gottlieb when he said, “…it is morally unfair and psychologically impossible to expect religious citizens to check their values at the door when they enter the town meeting of democracy. Religious authority must not directly translate into political authority, but a religious perspective has as much – or as little – of a role to play in shaping our vision of our common life as any other.” (Liberating Faith [Rowman and Littlefield 2003], xix) The question for us, in the Trump era, is whether we have the courage to sustain that necessary engagement alongside our students, in and out of the classroom.

Teresa Delgado is Director of the Peace and Justice Studies Program and Professor and Chairperson of the Religious Studies Department at Iona College in New Rochelle, NY. A native New Yorker, Teresa teaches courses at the intersection of theology and ethics, such as Biomedical Ethics and the Christian Tradition, Christian Sexual Ethics, Creative Peacemaking, and Violence, Peace and Social Justice.   Her research interests and scholarship range from diversity in higher education, transformational pedagogies, constructive theology and ethics, and justice for racial/ethnic/sexual minoritized persons.  Teresa's book, A Puerto Rican Decolonial Theology: Prophesy Freedom, was published with Palgrave Macmillan in 2017. She is currently working on a manuscript in sexual ethics, titled Loving Sex: Envisioning a Relevant Catholic Sexual Ethic. She lives in Mount Vernon, NY with her spouse, Pascal Kabemba, and their four children.