Home > Resources > Blog > Race Matters in the Classroom > In the Thick of It!
Selected Items Select an item by clicking its checkbox
Actions for selected results:
Sign-up to receive email alerts when new blogs are posted Read our Blog Series List of  Bloggers 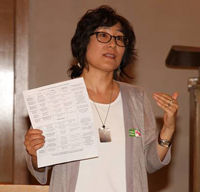 In the Thick of It!

I am on sabbatical this year. When the shooting in Ferguson occurred, it got me thinking about the last course I was teaching before I went on sabbatical. I pulled out the syllabus and began taking notes on this event as a “living document.” As a practical theologian, “the situation” is a primary document from which to read and upon which to reflect.  It can be used to make sense and meaning of the reality that is unfolding.

The course is called, “Race, Colonialism, Canadian Identities, and Intercultural Ministries.” I have co-taught it with my colleague, Prof. Lynn Caldwell, for the last 5 years at St. Andrew’s College, Saskatoon, Canada. It is pedagogically and intellectually one of the most rewarding yet challenging courses that I teach.  Students and teachers wrestle in class with the realities of racism and colonialism, which have shaped our nation, our church, and our world. We begin by unpacking white privilege, while deconstructing the way race is used to essentialize others. Once we identify our own social locations and multiple identities, students begin to realize that we are all affected by this social disease called racism, though in different ways. Once students begin to articulate that race is beyond skin color or physical appearance by viewing it as a historically constructed systematic oppression,[1] they also begin to see the intersectionality of race that links it with other social signifiers such as gender, class, immigration, and disability, to name a few. In this course, my students (mostly White and theologically progressive) are challenged to think critically about Canada as a colonial nation in which European immigrants are privileged. In the same stroke, First Nations and Aboriginal people have been disposed. And other racial minorities have often been systematically oppressed because of their origin and appearance, despite their remarkable contributions.

Why did I think of this course when I heard the news at Ferguson? Because this is not a random accident of a police officer (innocently) shooting a young person. And it is not a “Black” issue only. While Afro-Americans are the ones who are often targeted, other racialized groups suffer from the effect of racism as well.  It is not simply a US issue, either.

Here in Saskatoon, First Nations youth were taken by Police for “starlight tours,” dropped off outside of town in sub zero weather without adequate clothing and made to walk home.  Some never made it.  No one was held accountable by the authorities. (http://www.ohrc.on.ca/en/paying-price-human-cost-racial-profiling/impact-racial-profiling-aboriginal-community). So-called police racial profiling has happened and continues to happen in Canada.  It happens many other places as well.

Addressing racism is integral to theological education. Students preparing for ministry are required and encouraged to examine their own biases and assumptions. As the ones who are called to the teaching office of the church, our students need to learn how racism is embedded in the Bible, in liturgy, and in the ecclesial practices. We breathe in racism.  It is like toxic air surrounding us. Therefore we need to learn how to breathe it out with the breath of the Spirit and find new air to breathe in. As our students are called to be the pastor, they must attend to the needs of the people they serve. Such attention involves advocacy and prophecy.

One of my colleagues who was at the Wabash Center teaching workshop with me is teaching in a seminary located near Ferguson. I sent a note to him soon after the shooting and people were beginning to gather and protest. Here is what he responded:

I have a number of students who are right in the thick of it, providing great leadership. Please keep them and their congregations in your prayers.

Yes, we students and teachers must wade in the water and “get right in the thick of it.”  Let us confront racism in our teaching and learning.  There is much to do, much to learn, much to change.

HyeRan Kim-Cragg, Lydia Gruchy Professor of Pastoral Studies, Saskatoon, Canada. She grew up in South Korea. Her parents were refugees from North Korea. She made a transnational migration in mid 1990s to Canada to study at Emmanuel College, Toronto where she met her lifelong partner Rev. David Kim-Cragg with whom she has two beautiful children, Noah and Hannah. She loves walking and biking. She is the author of, Story and Song (Peter Lang, 2012), and Interdependence (Pickwick, 2018),  co-author of What Does the Bible Say (Cascade, 2017) and Hebrews: Wisdom Commentary (Liturgical Press, 2015). As a racialized postcolonial feminist scholar, whose teaching includes worship, religious education, antiracism, and intercultural education, she has published several articles that appear in journals Liturgy and Religious Education and volumes Liturgy in Postcolonial Perspectives (Palgrave, 2015), Postcolonial Practice of Ministry (Lexington, 2016), and Parenting as Spiritual Practice (Palgrave, 2017). She has also done research on migration as a postcolonial condition. Her work appears in the journal, Practical Matters (2018) and Church in an Age of Global Migration (Palgrave, 2016). Additional information:  http://www.usask.ca/stu/standrews/faculty_staff/kimcragg.php