Home > Resources > Blog > Stories from the Front > Education for Disobedience: Students as Teachers
Selected Items Select an item by clicking its checkbox
Actions for selected results:
Sign-up to receive email alerts when new blogs are posted Read our Blog Series List of  Bloggers

Education for Disobedience: Students as Teachers

In Brazil, there has been a recent uprising of students fighting for justice and better education. Several political developments have spurred the revolt of fourteen- to seventeen-year-old students in defiance of arbitrary laws of governors. Let me mention four events.

First, it was discovered that state deputies had stolen money that was supposed to provide food for children in the public schools of the state of São Paulo.

Second, the State of Rio de Janeiro (and São Paulo as well) through a so-called austerity plan, decided to close seventy-three schools, mostly in poor areas. The government abandoned these schools. There has always been a lack of water, school supplies, building maintenance and the list goes on. As you can imagine, the reality is very different in public schools in rich enclaves.

Third, the convoluted political climate of Brazil has taken the country to the brink of civil war. The unlawful coup to impeach Brazil’s president Dilma Rousseff has been orchestrated by the most corrupt politicians of Brazil with the support of the Supreme Court, the private sector, and the middle and upper classes.

Fourth, there are attempts throughout Brazil to break the constitutional laws providing a standard education. In order to restrict free knowledge, new laws propose to silence teachers by defining them only as “instructors,” without permission to give their own opinions. Education is to be “neutral.” Recently, the state of Alagoas passed such a law and students protested in the Legislative Assembly of the State of Alagoas taping their mouths.[1] 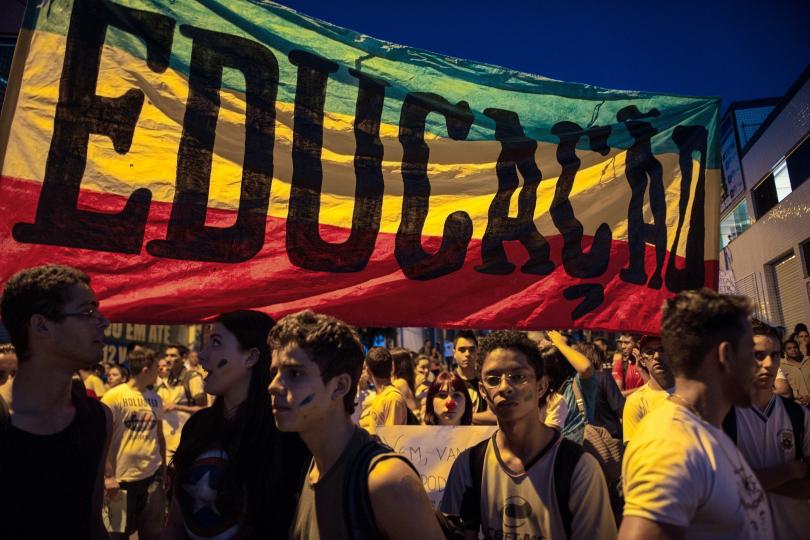 In all these examples, we see the State and those holding power going against the people. The attempt is to criminalize forms of resistance and withdraw freedom of thought and critical thinking. When laws are made against people by privileging one opinion or a certain social class, there is a demand for all of us to act. And a mandate to disobey!

This is what students are doing. They are occupying the schools that have been abandoned by the State. They are picketing against the state, they are creating an entire agenda of teaching events and preventing the state from closing them. They are learning through voluntary teachers from different areas who teach classes and give lectures. These teachers are teaching classes that are part of the formal curriculum but also classes that are not often taught, such as feminism, politics, sexuality and culinary arts. Artists are also coming to sing with students and to support them. They have organized themselves to prepare for the national test required for admission to colleges and universities.

“We have literature, biology, and philosophy classes but also audiovisual and several other themes and subjects. What we have learned the most is to work as a group. All we do and everything we decide is done as a group.”[2]

They plan to connect the schools with the communities. One of their events is the preparation of a common meal, feijoada (with samba), in order to sustain the group and help the community. The meal costs about $2 for one kilogram of food. They have very clear demands that range from changes in curriculum, expansion of some specific courses, new tasks for faculty, development of infra-structure, direct elections, and simply adherence to the existing education laws.

Students decided to fight. The state is not only abandoning these kids but in this case is clearly against them. So they are forming their own ways of resistance and survival, educating themselves with what they have and what they can improvise. They are heirs of Paulo Freire’s notion of education: educating themselves for freedom and autonomy. They are becoming subjects of their own history -- sharing and taking knowledge from various sources and constructing knowledge from and for their own communities, their own needs, and their own situation.

Just recently, a group of students stormed into the Legislative House of the State of São Paulo to demand a resolution responding to the theft of the money for student food. They occupied the House and announced that the deputies were there to work for the people and for the city.

“Today, we, the students of the State of São Paulo come here to give our awareness to you: we are attentive to what you are doing here. There are thieves of children’s food in this house. Nothing has been done to bring justice to this case. Therefore, we are beginning our occupation, until an investigative commission is begun to punish the thieves of the food of our children.” Occupy ALESP [Legislative Assembly of the State of São Paulo).”[3]

Outside of the legislature, street people tried to bring bread and hot chocolate to the students. Ronilso Pacheco, a black theologian from Rio de Janeiro, said, “These Occupations are the reintegration of the ownership of the politics from below.”[4] They have been threatened and attacked by the military police that stormed into some of these schools without judicial order and with the approval of the Governor of the State of São Paulo. These kids responded by singing:

Mom! Dad! I am part of the occupation!

So you know I fight for education

Mom! Dad! I am inside of the police car

So you know I fight for education[5]

These students are teaching us the forgotten meaning of democracy, that politics and common spaces belong to all and must be built by us all. They are saying that a democracy that actually works can only work with the people and for the people and cannot be a democracy if it works only for certain groups! They are showing us that when we have plutocracy (societies governed by a small number of the wealthiest citizens) vested in formal democracy to support themselves, that there must be a fight. New and just forms of government must be invented or regained. When there is violence against the people, we must resist. These kids are saying they will not say no to their dreams and to the hopes for their own lives and communities! In this way, they are creating spaces for new actions and thoughts, they are keeping history alive, open, possible! They are being educators of our society. We should listen to these students as our teachers!

As Freire says: “It is impossible that we think about tomorrow, more or less near or remote, without us encountering a permanent process of immersion in today, drenched in the time we are living now, touched by its challenges, incited by its problems, insecure before the insensibility that announces disasters, and possessed by a just anger as we are confronted by the injustices of those who express, in shocking levels, the human capacity to transgress ethics. Or receiving consolation by the manifestation of gratuitous love for life that strengthens us for the necessary, even though fragile hope."[5]

They are asking for freedom to study anything, to have critical minds. But more, they are asking for the rights of a good education and the conditions and the possibilities for any kid to have access to education. What was supposed to be a given in a democratic society has become a point of contention and demand. In order to fight for what in fact belongs to them, they have to resist and protest. Their fight is our fight! If our schools can teach students to disobey when there is no justice, we have taught them well. If our students just sit and wait for whatever comes their way, there is something really wrong with our education. We don’t know how long this will continue, but these students have already taught us and moved us so much with an expanded sense of democracy, citizenship, self, struggle for justice and the meaning of education.

We are heirs of an education of indignation. If to fight for rights means to disobey, we will! The words that guide us do not come from the authorities who say: conform, obey. Words of wisdom come to us from the students of the states of Alagoas, Rio de Janeiro and São Paulo. From them, we hear: disobey!

[3] Transcribed from a video of students protesting inside of the ALESP.