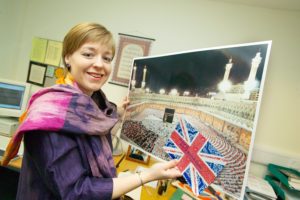 I want to pick up and develop here a theme introduced in my previous blog – the idea that students in the field of Islamic Studies – and indeed Theology and Religious Studies more broadly – often have to demonstrate through their assessed work, an awareness of the way in which multiple perspectives can exist in relation to a particular issue or debate. While it is quite possible to outline academic examples and arguments to illustrate diversity, after over 20 years of teaching students at both undergraduate and postgraduate level, I have come to appreciate the more profound learning and appreciation for different worldviews that are derived from the relationships established in the classroom…in this case between students who are Muslim and non-Muslim. Neither of these are homogenous categories, of course, but the students we teach on the ‘MA in Islam in Contemporary Britain’ at Cardiff University tend to identify with one or the other ‘label’.

It is particularly within the context of the smaller postgraduate taught course programme that academic staff can create a framework where differences can be explored safely, and the mutual benefits of diverse worldviews and experiences valued. If students are interviewed prior to admission and we learn something about their motivations and aspirations we can identify the particular skills or attributes that they might bring to the classroom. Articulating some of these qualities and experiences during ‘introduction’ sessions early in the programme, students begin to recognize and value the potential knowledge and skills of their fellow learners. Meanwhile, as students start to understand the academic and personal demands of the course, their mutual inter-dependence can become evident. Some examples will illustrate the point.

Our emphasis on the collection and analysis of qualitative data requires that students undertake fieldwork of some kind. Non-Muslim students making the transition from undergraduate to postgraduate learning rarely have the experience to appreciate that accessing Muslim communities may require navigating the landscape and politics of different organizations; it is here that Muslim students might act as guides or gatekeepers. Another example: as non-Muslim students begin to understand the contours of Muslim communities, they often become more curious about the dynamic of ‘lived’ Islamic devotions and lifestyles. Informal ‘halaqahs’ (traditional Islamic learning circles) have sometimes evolved quite spontaneously among particular cohorts of students, extending the learning experience well beyond the material or information delivered by academic staff. When these occur – perhaps followed by restaurant-based sociability – it is a testament to the quality of the classroom atmosphere that has been generated by academic teachers in the first place.

Conversely, some Muslim students, especially those coming from non-traditional learning backgrounds (e.g. Islamic seminaries), often benefit from the academic capital and confidence of those non-Muslim students whose studies are a continuation of a normative undergraduate university programme. Muslim students coming from entirely confessional learning environments often lack an understanding of what a phrase such as ‘critical evaluation’ means in an essay title. Coming from what tend to be text- and teacher-focussed learning contexts, the shift to more learner-centered study is sometimes a difficult transition…but one that is eased by the relationships formed with non-Muslim students whose academic background has often been shaped by a stronger emphasis on self-directed learning.

Among the student body sharing the identity label ‘Muslim’, there are further layers of diversity. Our academic classroom has enabled conversation across the Sunni-Shia divide, and among students who are affiliated to one of the many Islamic reform movements. Converts meet Muslims from a range of ethnic backgrounds, thereby offering mutual opportunities to appreciate the way in which Islamic worldviews and practices might be heavily shaped by a range of ethnic and cultural traditions. Even within the context of a relatively small postgraduate classroom, perhaps numbering no more a dozen students, the serendipitous religious diversity within the cohort complements other markers of difference, such as age and gender.

Early in their studies, students are invited to join a private LinkedIn group, and a Facebook group. Both during, but more especially after their studies, these social media networks have enabled the continuation of relationships and identification with the academic programme well after graduation. Consequently, students learn the centrality of relationships, especially those that can offer them the potential of lifelong access to people and networks of religious, academic and social capital. But this does not happen by itself…it is faculty staff who necessarily create the initial learning environment of mutual respect and trust, most clearly exemplified by a willingness to share their own learning journey.