Home > Resources > Blog > Stories from the Front > My Rant about Safe Space
Selected Items Select an item by clicking its checkbox
Actions for selected results:
Sign-up to receive email alerts when new blogs are posted Read our Blog Series List of  Bloggers

My Rant about Safe Space

Please indulge this low-grade rant. I believe the notion of “safe space” in adult classrooms is un-interrogated and oversubscribed.  The question is … Safe for whom?

Well-intentioned teachers, in wanting students to attempt deep conversation, wrongly presume adult students need to feel safe in order to effectively learn. Rarely is it asked – what does it mean if the conditions which provide safety for some are the same conditions which render others vulnerable and exposed?  I believe safety, as a proviso for student participation in difficult conversations, is potentially harmful for societally minoritized persons, and potentially counter-productive to the aim of critical engagement for all.

Of course, classrooms need to be spaces which are free of abuse, assault and bullying of learner and teacher, alike.  Severe breeches in civility, blatant acts of hostility and covert violence are monitored by institutional policies and procedures for human rights (Title IX).   The notion of safe space, as I understand it, does not attempt to guard against those encounters regulated by institutional protocols for human rights.  Instead, the notion of safe space proffers itself as creating space for conversation among persons with differing interests, opinions, and worldviews.  Suppose safety for the comfort of some students is made at the expense of other students?

Never have I attempted to achieve safe space in my own classrooms.  Unfortunately, I have participated in conversations when “safe space” was declared by the facilitator or participant.  The declaration is usually without discussion or explanation of what “safe” means in that particular ecology.  In the classroom, when someone proclaims “this is safe space,” then all are expected to follow suite with this ambiguous contract of engagement. Too often, safe space is foisted upon the group without definition or consensus.  This defies best practices of learner-centered classrooms.

Secondly, as I understand it, safe space is usually characterized with the inference of confidentiality.
In declaring safe space, participants are encouraged to speak openly and honestly of their thoughts and feelings because in safe space, allegedly, words will not be repeated beyond the room. Certainly, no one, given the choice, wants to feel vulnerable while doing the hard work of learning or teaching.  Rather than encouraging students to build courage, hone the skills of listening, and develop a more thoughtful approach to ideas and their power, declarations of safe space lull participants into reckless disclosures of sensitive details of their lives.  If then students or teachers think that what they say will not be repeated simply because of declared “safe space,” then there is a lack of awareness of human frailty and sin.  After all, what happens in Vegas, NEVER stays in Vegas! 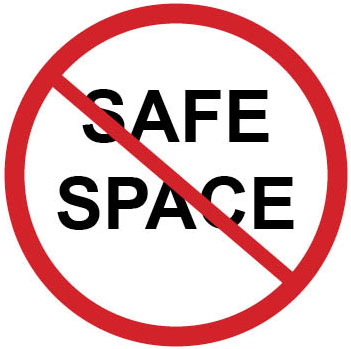 Additionally, it feels fool-hearted to suggest the therapeutic tool of confidentiality as responsibly operational in a classroom setting which does not have the expertise necessary for a therapeutic approach to dialogue.  Religion and theological classrooms are never appropriate places for therapy.

Thirdly, safe space seems to imply persons who risk speaking have the promise of no accountability. Persons are instructed that they can speak honestly, openly – as if the lure of safety will bolster the confidence of the shy or the weak.  Problematically, safe space views conflict and behaviors of consternation as bad and to be avoided in classrooms.  This politically-correct attitude unwisely implies that everyone has the right and privilege to feel safe everywhere.  Built into this cavalier vagueness is the presumption that judgement is suspend-able during the discussion – meaning, words have no binding, communal consequences for the person who speaks them.  Detaching the words from the person who speaks is the politic of western, supremacist thought.  Disembodying the spoken words from the one who speaks feels counter-productive to embodied, liberative pedagogies.

Finally, those with privilege - inherited, granted or snatched - exercise few coping skills for feelings of vulnerability and powerlessness in adult classroom spaces.   The notion of safe space is initiated when those who are un-accustomed to being vulnerable are pushed beyond their norms of experience.  Safe space, then, leaves those with societal targets on our backs (women, LGBTQ, economically disenfranchised, non-white, etc.) to listen to those in power who now, in safe space, can speak with reckless abandon.  The speaker, shrouded in safety, naively and insensitively escalates to sentiments which too often spring from narrowness of experience and ignorance of the ruthless politics of body and oppression. The wounding, jagged politics of gender, sexual orientation, class, and race is exacerbated in safe space.  Safe space primarily serves to create comfy, hotbeds of spoken bias and arrogance which potentially demeans, brutalizes and belittles those who are expected to listen in the vacuum of safety.

This is the 9th post in this series by Nancy Lynne Westfield this semester (Fall 2015).