Home > Resources > Blog > Race Matters in the Classroom > Ferguson, Bible, and the “Long Division” of Race
Selected Items Select an item by clicking its checkbox
Actions for selected results:
Sign-up to receive email alerts when new blogs are posted Read our Blog Series List of  Bloggers 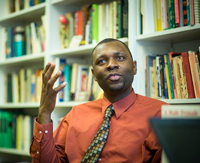 Ferguson, Bible, and the “Long Division” of Race

In my “Introduction to the Hebrew Bible” syllabus, a couple of sessions are reserved for the Exodus
story: its claims about liberation; the use of official “war gear” against civilians; the dread of nightfall; legislative debates; witness accounts to the sights and sounds of violence; the importance of memory, etc. “After” Ferguson, teaching this biblical story almost sounds too convenient. Yet, engaging race and racism is like solving a math equation: long division with remainders. The burden of structural racism is not just its deadly power, but also its insidious perpetuity, in spite of its irrationality; its unwanted and unsolicited obliging of its victims to justify their presence in the public space (as was the case with Trayvon Martin, Anthony Davis, and Michael Brown). In the quasi public space of the classroom, race adds double consciousness (W. E. B. Du Bois) to critical inquiry. Intellectual shades of gray that fascinate the mind and lead to complex analyses also fade into brown and black and white and yellow bodies that populate my classroom.

Zoom in. “The ultimate expression of sovereignty resides, to a large degree, in the power and capacity to dictate who may live and who must die.” So writes the political theorist, Achille Mbembe, describing what he calls necropolitics. This is what Ferguson also represented – a practice in necropolitics. The outrage over the death of Michael Brown also soon manifested itself in the form of “American soul searching:” to many pundits, the horror of excessive police brutality – in the militarized response to protesters – was shocking because it took place in an American city, not in some faraway place where, presumably, chaos would be acceptable, if not understandable. The problem with institutional racism is that it cannot be mentally exorcised to some faraway place.

Zoom out. Sample macro picture: on December 19, 2007, the finance and business journal, The
Economist
, published an essay titled, “The Bible v. the Koran: The battle of the books.” It was a market-based analysis premised on the idea that “the business of marketing the Bible and the Koran says a lot about the state of modern Christianity and Islam.” It explored how Christians and Muslims (“people of the book”) use the tools of modernity such as technology, globalization, and growing wealth to aid their goals of “spreading the word.” As I have reread the article (which I also assigned to my students), I have wondered, even shuddered at its “health report” which predicted an increase in violence at the intersections of Bible, politics, religion, ethnicity, and culture. The article ends with words that echo a biblical story: “The twigs of the burning bush are still aflame with the fire of God.”[1]

Traditional historical-critical analyses meet postcolonial analyses: When young black and brown bodies face deadly fires from the barrel of a gun – colonial or not –, then how one teaches about divine flames and burning cities and ethnic/racial identity changes. I am drawn to Du Bois’s short essays, "Of the Culture of White Folk" (1917) and "The Souls of White Folk" (1920) as I reexamine the intersections of racism and the self-legitimating claims of (colonial) violence.

Some practiced routines of communal responses to the trauma of deadly, racial animus are becoming predictable: a funeral service where the Bible is repeatedly read and referenced in search for hope and justice; a legal process that rehashes the old, old question of equality before the law and the experience of that equality – if and when it comes – as a posthumous credo to console the weary hearts of victims. How that debate is formulated locally and globally is particularly poignant when specific bodies are always seeking and asking for justice, oftentimes feeling hollow from having witnessed how justice itself is executed in dead bodies lying motionless on the streets or in coffins.

How might one teach the Bible AFTER Ferguson? Claire McGinnis has explored teaching Exodus as a “Problem Text” (2002), with emphasis on the complexity of the biblical story and on communal interpretation. Students recognize the complexity of the text and its multiple layers of ethnic discrimination, but for a number of my students, the necropolitics of Ferguson requires something more: clarity and praxis – rigorous text-critical reflection that honors embodied existence. It is almost “activist learning,” so I end up teaching around three themes: ideological construction (how the story constructs privileged and unprivileged identity in the public space); deconstruction (how the story disentangles and sometimes undermines those same identities); and reconstruction (how the story imagines alternative identities and their institutional character). It is indeed long division with remainders.

Du Bois, W. E. Burghardt. “Of the Culture of White Folk,” The Journal of Race Development

Mbembe, Achille. On the Postcolony. Berkeley: University of California Press, 2001.